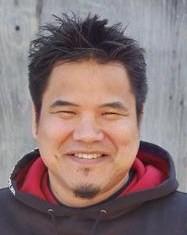 Born in 1970, Dean Heron is a member of the Wolf Clan of the Tlingit First Nation in Teslin, Yukon. He saw many parts of the country while growing up, but it was living in northern British Columbia that had the biggest impact on his sense of environment, community and self-identity.

Dean comes from an artistic family; his father and oldest sister are painters and his birth father is also an artist. His parents encouraged him to explore his Native heritage from a young age, and in the early 1990s he started to pursue his lifelong commitment to learning northwest coast Native art. He started with Aboriginal paintings and designs, but felt a strong desire to learn the art of carving. In 2006, this took him back to the north — to Terrace, BC — where he began formal training in drawing, design, tool-making and carving under prominent aboriginal artists Stan Bevan, Ken McNeil, and Dempsey Bob at the Freda Diesing School of Northwest Coast Art.

In the spring of 2007, Dean was recognized by the Northwest Community College with the Dr. Freda Diesing Award.

In December of 2007, Dean Heron traveled with his teacher and mentor, northwest coast Native artist Stan Bevan, to Australia and New Zealand to open the People of the Cedar exhibit in Melbourne, Australia and to visit carving schools in New Zealand with the intention of learning from their curricula and to speak to and learn from other Aboriginal artists.