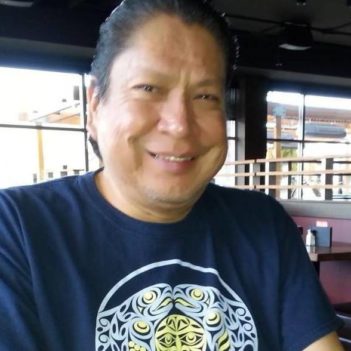 Joe Wilson is a Coast Salish artist who was born in 1967, and raised at Koksilah near the small city of Duncan on Vancouver Island, British Columbia. His keen interest in native art began at the tender age of 12 whilst watching his stepfather, Johnny Sampson, design and carve beautiful native artworks. However, fierce competition with his younger brother, Rick, motivated Joe to take his artistry seriously: “That’s when I frustratingly started really applying myself. Even back then I had it in my heart to be one of the best out there in our field [Coast Salish Territory] and I did it.”

At the young age of 17, Joe began producing and marketing his various Aboriginal paintings and carvings within the local region. Since then, he has apprenticed under master carvers such as the late Simon Charlie and Coast Salish artist Charles Elliott, and studied under Nuu-Chah-nulth master carver Tim Paul at the Royal British Columbia Museum. Joe has studied northwest coast native art extensively and has emerged as one of the most prolific Coast Salish artists today.

A soft-spoken man, Joe’s northwest coast Native art speaks of confidence and strength and has a unique and original style. His colours are bold and unconventional, yet extremely appealing and rich.

Joe has always felt that the Coast Salish native art form continues in its tradition to be inspiring within its form and unique flair. His Aboriginal paintings and carvings are not only traditionally authentic, but also an artistic communication link between cultures.

Joe Wilson will continue to push the boundaries of Coast Salish art while creating works that distinguish and preserve his culture for current and future generations. His talent will continue to bring him the recognition that is reserved for outstanding artists.