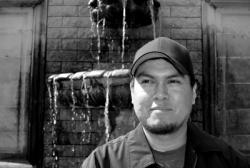 Leslie Robert Sam was born in Duncan, BC in 1973. He adopted the artist name lessLIE in reference to the deception and betrayal that First Nations peoples suffered as a result of colonization.

When lessLIE was six months old, he and his mother moved to Seattle to be closer to other family members, in particular, his grandfather, Gary Rice. lessLIE credits his grandfather, a Coast Salish native artist himself, with instilling in him and encouraging the passion to be an artist. He believes that having spent those formative years in a large urban centre has influenced the direction of his art, as it relates to issues of environment, dispossession, and race.

lessLIE holds a B.A. in First Nations Studies from Malaspina University-College and is currently working on his Masters of Arts within the Interdisciplinary Studies Program at the University of Victoria. As a component of this graduate degree, he has also worked at the Thunderbird Park Carving Studio at the Royal British Columbia Museum.

While working on his degree, in 1995, he began studying Coast Salish art, in particular, the works of contemporary artist Susan Point. He was also encouraged and inspired by his cousin Joseph Wilson, who is one of the most prolific Coast Salish artists today. Other influences include Manuel Salazar, Maynard Johnny Jr., Shaun Peterson, and Luke Marston.

lessLIE has participated in numerous solo and group exhibits, including the Art Gallery of Greater Victoria’s first-ever exhibit, focused entirely on contemporary Coast Salish art, and designed the logo for NEARBC, an Aboriginal health research networking program and Aboriginal health resource site of the Centre for Aboriginal Health Research (CAHR) at the University of Victoria, British Columbia. His works can be found in collections around the world and form part of the University of Victoria Art Collections, the permanent collection of the Art Gallery of Greater Victoria and the collections of the Westfälisches Museum für Naturkunde in Münster, Germany.