What is Serigraph Printing? 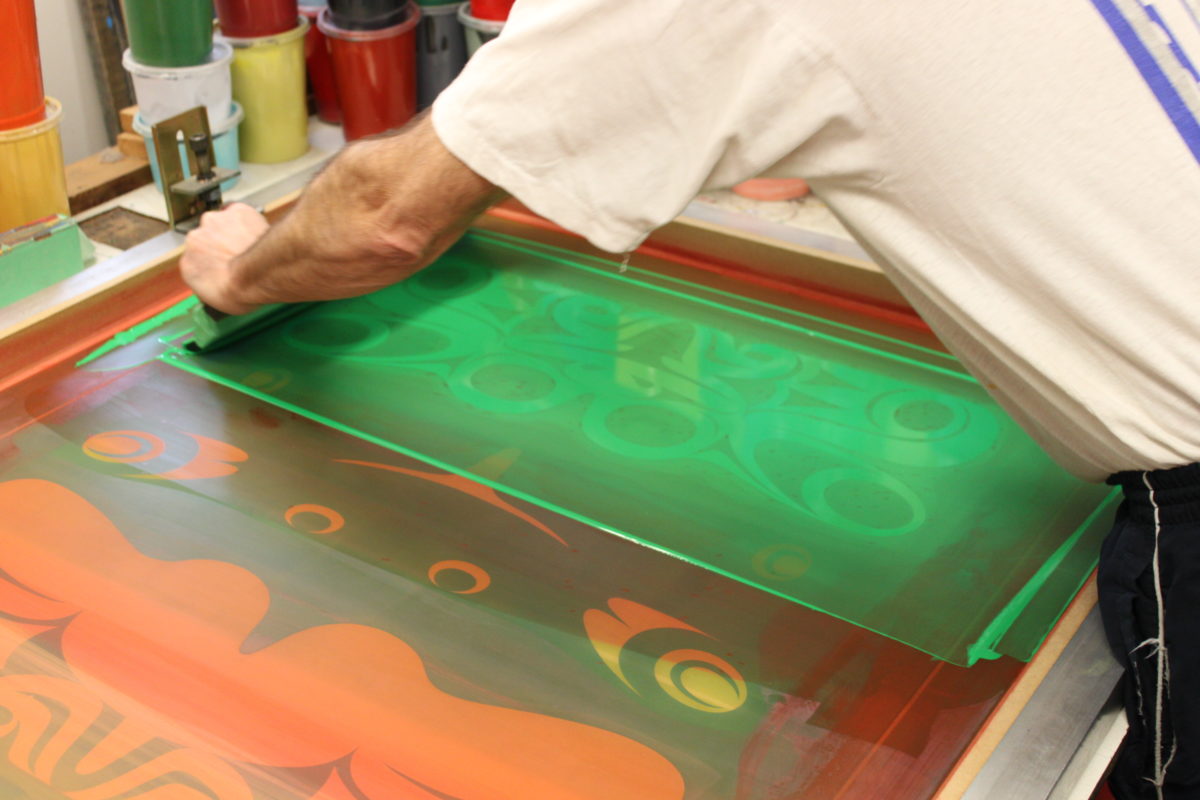 Serigraphy, also known as silk screening, screen printing or serigraph printing, is a stencil-based printing process in which ink is forced through a fine screen onto the paper beneath. Screens were originally made of silk, but they are now made of finely woven polyester or nylon.

The screen is stretched over a wood or aluminum frame, then areas of the screen are blocked off with a stencil (a negative of the image). The screen is then placed on top of paper, and ink is placed on the screen. A rubber-bladed squeegee is used to spread the ink evenly across the screen, allowing ink to pass through the open spaces onto the paper below.

A different screen is used for each colour in the print, resulting in a final serigraph with great colour density, colour saturation and texture.

Why all the different names?

‘Serigraphy’ is the artist’s term. While it can be used interchangeably with ‘silk screening’ and ‘screen printing’, ‘serigraphy’ differentiates the artistic application from the industrial use.

And in case you’re wondering, the word ‘serigraphy’ is a combination of the Latin word seri (silk) and the Greek word graphein (to write or draw).

What is the history of serigraphs?

Serigraphy is the oldest form of printing. Its origins can be traced to the prints, woodcuts and block prints of the Song Dynasty (960–1279 AD), and later to the Japanese in the 15th century, when artists used the technique to transfer designs to silk fabric.

Serigraphy was finally introduced to the West in the late 18th century, but it didn’t catch on until the early 20th century, when silk mesh became more available and a profitable outlet was discovered. Europeans first used it to print expensive wall paper made of linen, silk and other fine fabrics, but as the market expanded and techniques became more refined, serigraphy became a valuable industrial technology.

In North America, serigraphy “officially” became an art in the 1930s, when a group of artists (who later formed the National Serigraphic Society) coined the term ‘serigraphy’ to differentiate their serigraphs from those produced for commercial purposes. Andy Warhol is generally credited as the first person to popularize screen printing as serigraphy.

Are serigraphs reproductions of original artwork?

No. Serigraphs are original art. Unlike reproduction prints, which are merely a colour picture of an existing artwork, serigraphs require the involvement of two artists: the original artist and the printer.

Although automated serigraph machines do exist, the printer we work with creates serigraphs entirely by hand. He’s a master at his craft, matching the colour of the original exactly, cutting the stencils and manually applying the colour evenly.

Once the serigraphs are completed, each one is individually inspected by the original artist, then signed, titled and numbered. With limited edition serigraphs, the artist also destroys all trial copies and stencils, guaranteeing a one-time printing of a specific number of pieces.