This limited edition print, titled Thunder "is a representation of a character named Sqaleken (anglicized: “skall-leh-ken”) who, in Hul’qimi’num mythology, was the first person to encounter the Thunderbird and acquire its spirit powers. This legend took place in my family’s historical village of T’a’at’ka (now known as Lyackson) on Valdes Island. According to the legend, Sqa’lek’en went on an isolated vision quest into the woods and disappeared. After weeks away, his family assumed that he had died and mourned their loss. The family grieved for many years, until Sqa’lek’en miraculously reappeared. When he returned, Sqa’lek’en wore a unique weaved-cedar hat, which kept his eyes tightly shut. He explained that he encountered a supernatural being called the Thunderbird who took him to the spirit world. When he was brought back to the earthly realm, the Thunderbird spirit lived within him. This meant that, if his eyes looked directly at anyone, they would be struck by lightning. And whenever he took off his hat, a violent storm would emerge. So he built a home on the top of Mount Maxwell, keeping a safe distance from any villages. While initially, Sqa’lek’en did everything he could to keep people safe from his powers, eventually he started to use his powers for his own selfish desires. He began forcing people to give him valuable items, and then started to demand that neighbouring Chief’s offer their daughters as his wives until he had 200 women living with him on Mount Maxwell. As Sqa’lek’en terrorized the region, two brothers from Cowichan on Vancouver Island decided that he needed to be stopped. They used their Spirit powers to create an elk-horn club that would be capable of defending against Sqa’lek’en’s attacks and capable of forcing the Thunderbird’s spirit out of his body. The brothers put on war paint and their warrior regalia, and then climbed Mount Maxwell. They attacked Sqa’lek’en’s and used the power of the club to defend against the lightning strikes and the storm. They eventually reached Sqa’lek’en and struck him with the club. As he fell, his hat tumbled to the floor and the spirit of the Thunderbird spirit rose out of his head and flew into the sky. So in this design, I have depicted Sqa’lek’en at the moment when the Thunderbird spirit (represented by the two birds) left his body and rose into the sky. Thematically, this Salish legend seems as relevant today as it was in ancient times. Sqa’lek’en’s descent into tyranny demonstrates that, when a person possesses significant power, he must be careful not to be corrupted by selfish desires."
- Dylan Thomas This limited edition silk screen print titled "Thunder" by Dylan Thomas was hand produced by the screen printing process. It is the only limited edition printing of this design. The artist has inspected and signed each copy in the edition. The printer has destroyed all trial copies and obliterated the printing stencils. 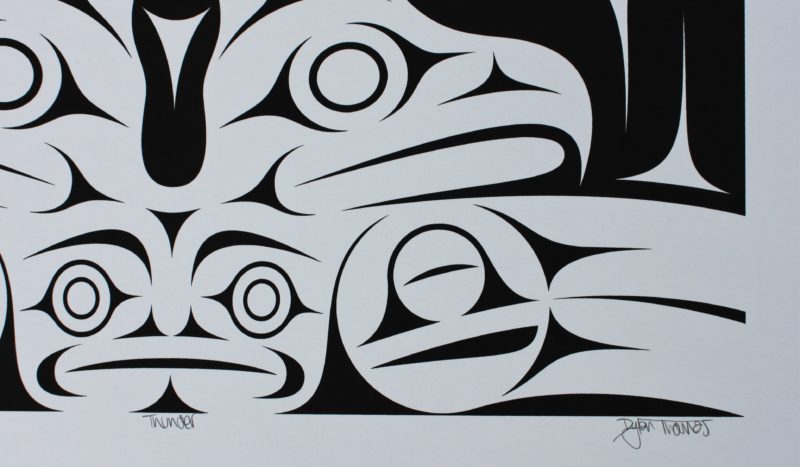